What do you wish for

Every biker do surely have a dream bike in mind which roams the heart every time and it surely welcomes a smile despite the fact that it changes every time due to circumstance surrounding your every day ride.  Most die hard bikers always stick to one brand like a “Fan thing” but still appreciates other brands.

I ride a KTM 990 ADV which was based on my fun demand and my finance,  making me pick a model which does everything thinkable (all terrain/all purpose) fairly enough better, more rugged than the BMW R1200 GS my view. Bikers always want to upgrade to the newer models (year) but the 990 ADV is epic and will always sticks around for long because of the nice fun memories it creates.

The KTM 990 duke/SMT made me like the brand KTM but from years of experience I got so much interested in real hard core off road, initiated by Bami (a crazy friend) but still never dropped the thoughts of having a super duke, now the GT is out and so temping but where is the money?   ….loooool

The KTM Super Duke GT is almost a contradiction in terms, because if ever there was a bike that seemed unlikely to gain the letters GT at the end of its name, it was the Super Duke. A Gran Turismo machine traditionally blends high performance with long-distance comfort, attracting adjectives such as elegant and refined in the process.

By contrast the original Super Duke, launched in 2005, was the ultimate two-wheeled hooligan. Its potent V-twin engine’s power delivery was sharp, factors such as fuel range and comfort were all but ignored, and its character was highlighted by a publicity video showing it pulling wheelies through Tokyo traffic.

Two years ago the Austrian wild child grew up with the launch of the 1290 Super Duke R, whose thunderous 1,301cc engine’s 180bhp output was matched by a new level of electronic sophistication. And when that bike was complete, its development team realised that the super-naked V-twin had potential to evolve in an even more rider-friendly direction. 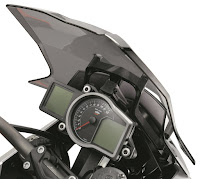 It’s a gloriously strong powerplant, its sweet throttle response – in contrast to those early Super Duke ancestors – helping to make the bike controllable and thrillingly fast. The broad spread of torque delivers instant acceleration from below 5,000rpm. And the GT loves to rev, storming towards its 150mph-plus top speed with the help of KTM’s first gearbox quick-shifter, which works only on up-changes.

The GT is notably more comfortable at speed than the Super Duke R, thanks to its broader fuel tank, which shields the rider’s legs, and its windscreen, which diverts wind from the chest. But hands get little protection and, although the screen is easily adjustable on the move, its range of about 5cm is insufficient to eliminate loud turbulence, especially for taller riders.

Chassis layout is based on that of the Super Duke R but incorporates semi-active suspension similar to that introduced with last year’s 1290 Super Adventure. The GT is relatively light, at 205kg, and impressively agile. As with the dual-purpose bike there are three settings – Sport, Street and Comfort – which alter its handling characteristics, relatively subtly in this case. 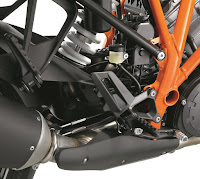 The WP suspension units’ travel is reduced from the Super Adventure’s but still fairly generous, giving a compliant but well-controlled ride even in the firmest Sport setting. That helps make the GT respectably comfortable, as does its larger seat. In bends the new electronics package provides an excellent traction control system, plus cornering ABS that enhances a powerful brake set-up featuring Brembo Monobloc front calipers.

So the GT is fast and safe, and it’s also respectably practical. Its 23-litre tank gives a reasonable range of 150-200 miles despite the engine’s thirst when used hard. Useful features include daytime riding lights, cruise control, self-cancelling indicators and heated grips. The accessory list adds a heated seat and slim yet capacious purpose-designed panniers, each of which holds a full-face helmet.

The GT’s standard features contribute to a price of £15,999 that makes it £1,850 more expensive than the 1290 Super Duke R. That difference is understandable, because this KTM is an entirely different beast. The GT arguably lacks the weather protection required to be a true Grand Tourer but it’s admirably civilised and well-equipped – and still bursting with the performance and aggression that has long made the Super Duke such fun.

Verdict: Powerful, fine-handling and sophisticated V-twin that adds some sports-touring comfort and practicality to the Super Duke’s traditional naked excitement 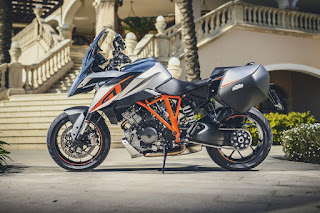 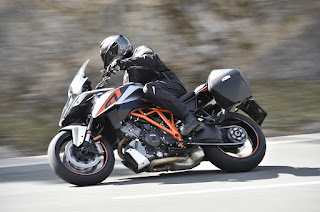 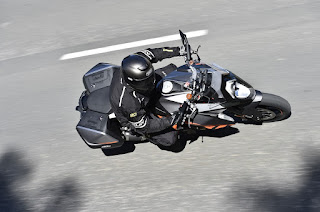 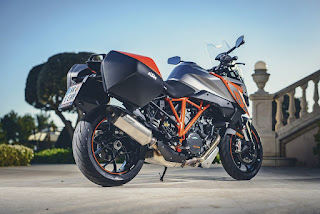 Preparations for the annual Red Hearts Pumping, Guts display, mastery of dangerous brilliance and dare-devil contest has been building right after last year's Edition where Jack "AirBender" Affara fearlessly defended his coveted title - the first and only Man in the history of the sport in Nigeria to do so.

With so many riders inspired to do better than Jack Affara, before the first quarter of 2016, 30 riders had fought against the economical tide of the country to secure their racing spots for a shot to be on the podium at Nigeria's Road Race Annual Festival of Speed. 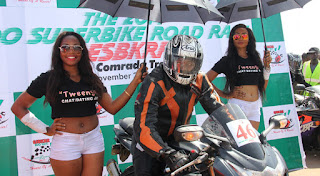 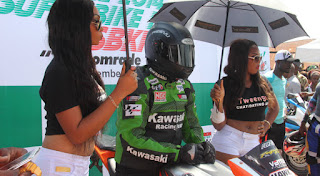 The BT is not just an ordinary Motorcycle event. It is about those who "Pump Red", a thoroughbred pure motorbike Racing. The Event boosts a 33Km long layout of near-nylon tarred asphalt, an immediate hit for the racers to max out their respective power plants. The BT Trajectory is not like that of the regular race track: High Speed Corners, Low Speed Corners, Chicane, Uphill, Downhill, Camber, Speed bumps, Hard Braking, deceleration, First gears second gear corners, No! You miss all those running through the Track that spans 8 Communities. At the BT, you experience "Bikegasm". A complete communication between man, machine and road bliss. It is also all about top end. It is a start and go affair. In a sport where victory is measured by a tenth of a second, every moment counts for either victory or loss. In Motorsports especially at the highest level of competition, there is no margin for error at the BT because just like in the country, anything can happen! It is #GutsSenseSkills. The BT Racers have a whole day Free Practice session on the Friday preceding the Saturday Race Day (26th November 2016) in which they get themselves acquainted to the track. 33km of track that will test their concentration powers! 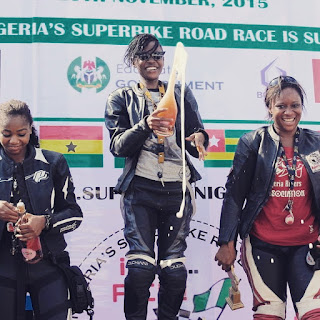 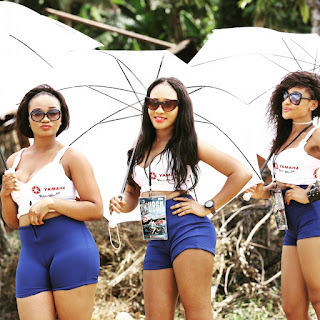 Women like Men, Men like Women. Here everybody is equal. The only distinct factor is your guts and how big your overwhelming sense of self preservation, believe in your abilities and willingness to max it out are. This is what separate the Men from the Boys. At The BT, Skills and an acute knowledge of Racing and Motorbiking is not enough. The difference between winners and "winners" at The BT is how well your Skills and Sense match your GUTS. The BT is not a Play ground, it is not a Testing ground. It is where men have come to make history and write their name in gold in Nigeria's motorcycle Sports history!

Like every iconic race track, The BT Track that runs from Urhonigbe to Ugbokirima holds two famous points - The Airstrip and the Farmers' Curve. The Air Strip, your engine answers the speed call and arguably with just that stretch you can max out whatever Speed limit your manufacturer placed on your dashboard. The second throws you a very different challenge, The Farmers' Curve awaits you, a very sharp right hand curve after a high speed long radius left hand section of the race track. Here, you must defy the laws of inertia! The Farmers' curve is the masterpiece of the BT Track. Scary, Intimidating and outrightly notorious. Great Men have gone down here or "harvested cassava" in the BT fond terms.

The BT is unique! It is an event honoring the time tested traditions of road racing! It is racing! Pure and Simple! Open to those who dare to want to "define their limit". It boasts of Track and Road Racers who can boast of racing experience from all over the world.

There is only one way to experience The BT. Be There! And pay respect to the men and women  who don't do FEAR! Men, who when the history of Motorsports is written in Nigeria, will be called the gods of Super-bike Racing in Nigeria.

Posted by Unknown at 9:04 AM No comments:

What a day.. My Birthday started... quiet, alone thinking about the ride ahead. What a night.. I decided to roll out to merry with the gang. Made calls to know who was out to play - Yep! my G was coming out, "D boy".... Nice, we can talk about the dreaded ride and how it’s going to be fun getting to the location.

So quick the night flies by but still in check, so we ball out from a noisy environment to hit the lonely but not cool road to take the breeze home after a nice outing filled with laughter and merriment and deliberations on the long ride ahead. Bike so much in the traveling mood, bikers in anticipation for the ride lit their engines feeling prude being gazed by night crawlers, engaged their forward gear after a brief push back.

Road looks clear so we set out still in the 1st gear because we had a confused SUV ahead having so much fun feeling like they owned the road. Being ahead I noticed and slowed down, waiting for the cagers to make a decision. Rider 2 having it in mind that there is a brake away (group ride but 2 destination) overtook me hoping to break away seeing an open way from the cager.

The SUV was planning to make a U-turn. then came the big bang I never wanted to witness but it happened for nothing is ever planned when it comes to life and the much dreaded death. Biker looks lifeless but the will to finish the ride made him wake up from the slumber.

We thank God for life, rider is better.

Posted by Unknown at 4:03 PM No comments: