From The Eleko Motor Race 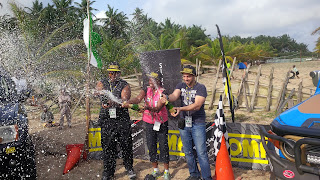 The second driver of Team Effiong edged out 8 competitors after two runs to top the combined time sheet to emerge the winner. Eji becomes the first ever woman to win the much coveted OMP Eleko Motor Race in the 800Metres long Igondo time trial track.

The race had 8 driver Team entries with 9 Riders in total with Team Effiong the only team with two drivers using the same car.

The race lights went off with Team Helen driving the 2014 Ford Explorer the first lady and first of 9 drivers to beat the 800Metres circuit time of 3 minutes posting a lap run of 2:58.00s at the wave of the checkered flag.

Team KIM’s driver Al-Keirr was next with his 2014 Toyota 4Runner  brawling and spinning out the sands off the track that lies on the shores of the ocean and crossed the line 18 seconds ahead of the Team Coscharis driver with a 2:59.08s.

Team RITA went 19 Seconds further down from the Al Amid after the checkered flag waved her Mitsubishi Pajero while Team DUDU with the traditional yellow colour of the Hummer H2 SUV touched the yellow tape at turn 5 and got strapped at turn 19 before rallying through to finish 2:22.08s.

Team IMAB driver Antony Ashokeji aboard the Land Rover made an impressive start to what would have been a perfect home run until he got trapped at turn 19 as the H2 and took the checkered flag 2:25.41s. Still detaining the track record of 2:05,65s from the race held on the 28 of June 2015.

Then came the moment of amazement as the crowds went ballistic sighting the gigantic 12foot tall Ford F150 juggernaut of Team Oversize. The big monster truck like the fans fondly called it was later disqualified after failing to beat the 3 minutes track limit posting 4:40.50s at the finish line. I guess his size denied him further run to challenge for the championship win. 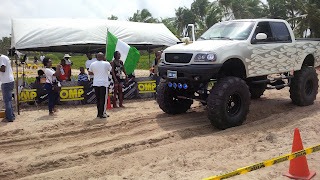 Team Effiong’s number two rider Eji behind the wheels of the JEEP Rubicon posted 2:18.13s before her team mate Inyang posted a 2:15.16 time to stay 3 seconds ahead of her (his wife) to maintain his number position as the Team’s first and top driver in the first run.

Team WURA was 8th rider to take on to the track with his highly tuned Toyota FJCruiser and rallied and hopped round the track to the applauds of the spectators and finished 2:18.74s only for his rival Edward of Team Edward racing the equally highly tuned Nissan Xterra posted the circuits fastest lap this the event of 2:08.47s

The drivers then had a 30 minutes break before returning behind their steering wheels on the track for the second run. Only Team DUDU and Team Effiong second driver were able to improve from their previous times with Eji of Team Effiong posting the fastest time of 2:15.08 in the second run to top the combined time sheets ahead of Team DUDU and Team KIM in 2nd and 3rd respectively.

Presentation of trophy to the Winners followed immediately after the hotly contested encounter that lasted over 2 Hours. For upcoming race timing and schedule, stay with www.bikersmovement.com and check out www.ompracing.it 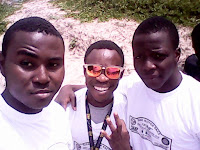 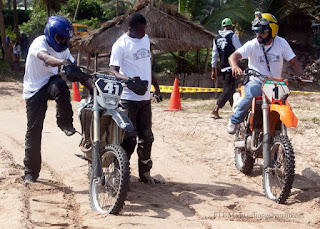 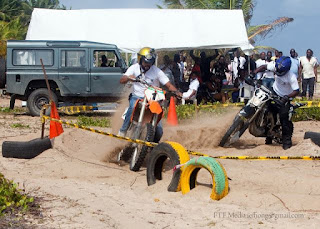 
The event will be illustrated better next time with team names and pictures
Posted by Unknown at 12:27 PM